About the untimely death of Racing Dogs

About the untimely death of Racing Dogs

lives in Hamburg and is constantly supporting animal welfare programs, both in Germany and Ireland. Even though, this is not her profession, but a voluntary commitment, she spends all her time looking for pet-food donations, financial supporters and informing as many people as possible about the misery, in which many Irish animals live.

Their tall and graceful appearance gives greyhounds a very elegant look. Since the 11th century, this quickest breed of dog was reserved for nobility. Having greyhounds gave them the possibility to enjoy dogracing and betting at the same time. This tradition has continued until today, not only in England, the motherland of dog races and betting, but especially also in Ireland.
Hardly anybody knows that Ireland specialized in dog racing with greyhounds. But there's one crucially critical aspect: The breeding of those dogs is focussed on getting the quickest, most profitable dogs that can keep up to 70 km/h. As this is known among exports all over the world, the export of Irish greyhounds is prospering enormously, so that breeders sell their dogs to the UK, USA, Canada and more recently to China. All over the world, casinos promote dog races, so it's not a surprise that Macau, known for the biggest casinos worldwide, is also investing in these races and has built their own dog track. It's the base for deals, worth billions which however leads to a sad fact: The dogs are suffering.

So what happens to dogs, that do not meet the needed requirements and that are already sorted out at birth? Or those greyhounds that are to old for the track?

If they are lucky, they'll be sent to a association that looks for adoption, but as this would mean additional work, they are 'simply' sent to a killing centre. This is where Kristiane's Irish Farm of Hope comes into play: She cooperates with many animal shelters and animal welfare groups around Ireland. Especially young and ill dogs are a focus of our work, as we have gathered a lot of experience over the years. We care for our protegés, help them to get fit again and look everywhere for a suitable new home. From the moment they arrive at the farm, dogs learn how to live in a house, instead of the kennel they were used to before.

This greyhound-pup has quickly found a new home, not only making the owners happy with their new family member, but also giving them the feeling that this being has found a life outside of its economical 'purpose' as a racing machine. 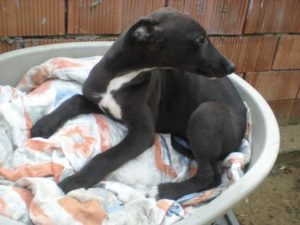 In general, greyhounds have a very simple character: If you give them a new home, love and safety, they'll reward you with more love than you could dream of.

"We make every effort to find a suitable, new home for our dogs. In contrast to rescued Spanish dogs that are simply sent to a new owner as soon as possible, we insist on placing dogs only when they have recovered both physically and mentally on our farm. When we really know the dog, we'll know what and who suits him best and look for the fitting new owner."